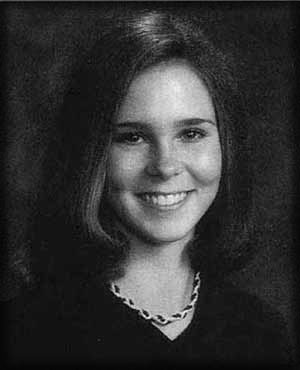 Reporters make mistakes. Actually, they make mistakes all the time. But sometimes they make a biggish one. The fellow sending me threatening and angry emails appears not to have been John Healy. Sorry John.

Let me explain step by step.

The night of April 1 I redirected the audience of this blog to my personal website in order to try to discover who it was who has been sending me threatening messages under the name "Aaron Swartz". These messages began to address my family. The same thing happened to Sam Ledyard, prompting him to shut down his blog.

One of the people who responded, did so using an IP in New Hampshire. The IP linked to the email: ispyeverywhere@yahoo.com

That email was also used here: 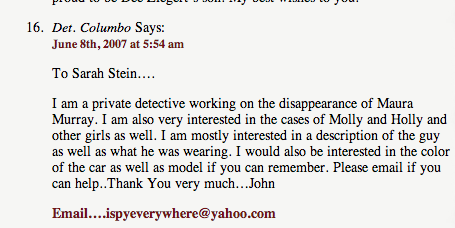 That appears in the comments section of an article related to the Molly Bish case (which some believe may be connected to Maura, as Bish disappeared not far from where Maura went to college).

"Det Columbo" is the moniker also used by John on Topix.

A follow up email from this person clearly wanted me to believe this person was John Healy, a PI I've interviewed, who did a bit of work on Maura's case and showed interest in the Bish case as well. 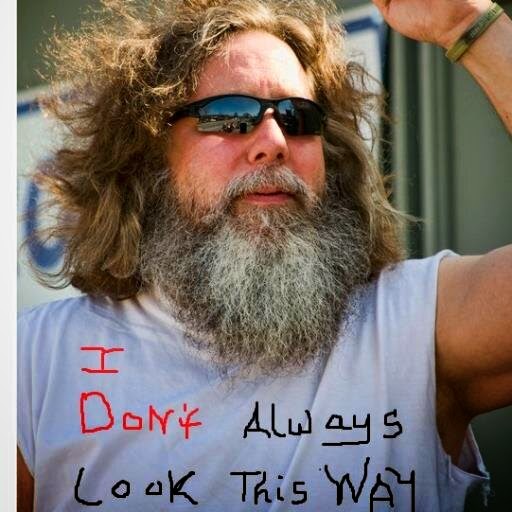 Whenever Wolfman posts, "Aaron Swartz" is not far behind, either on Topix or this blog.

Over on Facebook, Wolfman and Alden Olson are pretty tight. Olson, you may recall, was the creep who taunted Maura's family on the anniversary of her disappearance. Olson also posted a video on YouTube that showed pictures of my four year old son playing in my front yard.

It's also worth noting that the second term that comes up when you search Wolfman's email address on Google is this:

All this, of course, is very distracting to what's really important, finding out what happened to Maura Murray.

But this needed to be addressed before the trolls overran the comments section of this blog, which should serve to generate leads and not further some weird agenda.

I am turning the comments back on. You are all welcome to comment, though I will be deleting any threatening or attacking posts. I have finally found a plugin that works in Blogger to track IPs of visitors. I hope, after reading this, you can understand why I've decided to do so.

Let's get back to the case, now, please.

Posted by James Renner at 8:58 PM 72 comments: Links to this post

It's going to take me some time to get through all the information that came in last night. I have a couple people helping me track back these IPs. I'm assuming most of these are the kind, quiet, helpful readers who make this blog what it is. But there are some who have been threatening. And there is the possibility that Maura, herself, or the person who caused her harm, checked in last night. If you can help us condense some of these location, that would help.

Also, are there any locations below you think we should be particularly interested in? The most interest so far is someone checking in from Wichita, using multiple proxies.

Here are the cities from which people were reading the site at Midnight last night, whose IPs were logged:

**UPDATED**
Well, I didn't really expect this. One IP (from a threatening email) led back to the Manchester area and connected to an address used by Det. Columbo, aka John Wolfman, even though he was using the name "Dennis". I expected better of him. (Another avatar was posing as pi John Healy, which led to some confusion earlier. My apologies.)


Hull, MA
Posted by James Renner at 6:46 AM No comments: Links to this post

I Love It When a Plan Comes Together 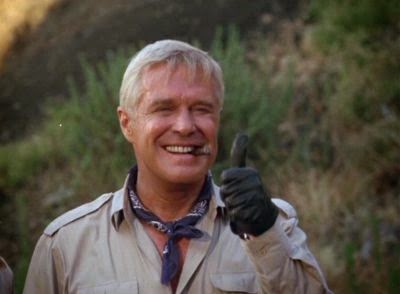 Over the last few days, as the comments on this blog have gotten angrier and more threatening I've been backed into a corner. They've all but hijacked the comments section of a blog meant to find Maura Murray (or at least to find what happened to her). These commenters are hiding behind the anonymity of the internet and threatening my family.

On Wordpress, there is a plugin you can use which logs I.P.'s of those visiting your site.

With the I.P. you can find location.

And with Whitepages, you can find address and name. 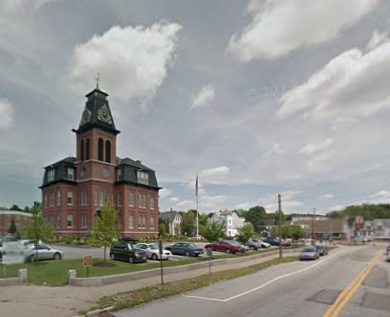 I needed info on commenters from Manchester, Hanson, and Weymouth. And they all dropped by tonight.

There's another reason I did this, too.

If Maura is being held (like those women in Cleveland) I thought it likely the person responsible would drop by. Or, hey, maybe Maura herself. So I will be logging the I.P.'s and send them all to NH Cold Case tomorrow. Perhaps it will kick up some new leads. 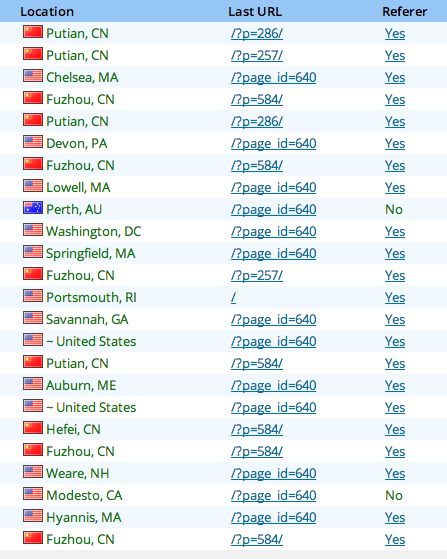 Some interesting things I noted:

Someone in Chelsea is VERY interested in this announcement. As is someone in Perth, Australia.

TO THE THREATENING COMMENTERS

Now would be a good time to apologize. But do it with your real name for once.

TO MY CONSTANT READERS

My apologies for this ruse. Hopefully it will be worth while. I will get comments running again, soon.

Major announcement coming at Midnight over at my official site. Feel free to make your best guess here.

Posted by James Renner at 7:22 PM No comments: Links to this post

Down the Rabbit Hole, Again... 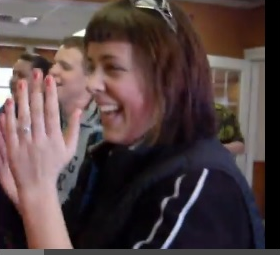 I'm guessing this is a long shot, but I'm going to post out of an abundance of caution.

After a day that saw Maura Murray Facebook page moderator, Troy Killman, quickly deleting his sock-puppet accounts, an astute reader found this video of a flash mob which "Killman" posted to YouTube.

There is a woman who appears in the video whom some believe resembles Maura, or what she may look like a little older/heavier.

What do you think?
Posted by James Renner at 7:23 PM 49 comments: Links to this post

***UPDATED*** The "Official" Maura Murray Facebook Page is Being Catfished 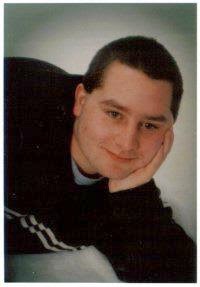 There is something odd with the main moderator over at the official Maura Murray Facebook page and it appears the family spokesman, Helena Dwyer, has been duped and the page is being controlled by an anonymous person with an unknown agenda.
He calls himself Troy Killman.

According to his profile, he is in a relationship with Casey Slone, a young man form Boston. Here's Casey's profile, which explains that he works for the NSA.

Except, wait. That profile is fake, created with photos pulled from Slone's real account, which I won't link to here. Sloan is actually involved in New England politics.

Killman claims to be from the Manchester, NH area, the hometown of prolific posters on Topix, who attack anyone suggesting that Maura may still be alive.

Manchester is also within the 22-mile "ping radius" of the mysterious phone caller who called Maura's phone the day she went missing in New Hampshire.

The term for posing as someone you are not, online, is "Catfishing."

It appears that Helena has given access to the official Maura Facebook page to a person who is creating false identities online, for purposes unknown.

Some have suggested this could be Alden Olson, the creep who taunted the family with YouTube videos a couple years ago.

Whoever it is, the authorities and the Murray family should find out who they're really dealing with. Especially given the connections to the mystery caller from the day Maura disappeared. 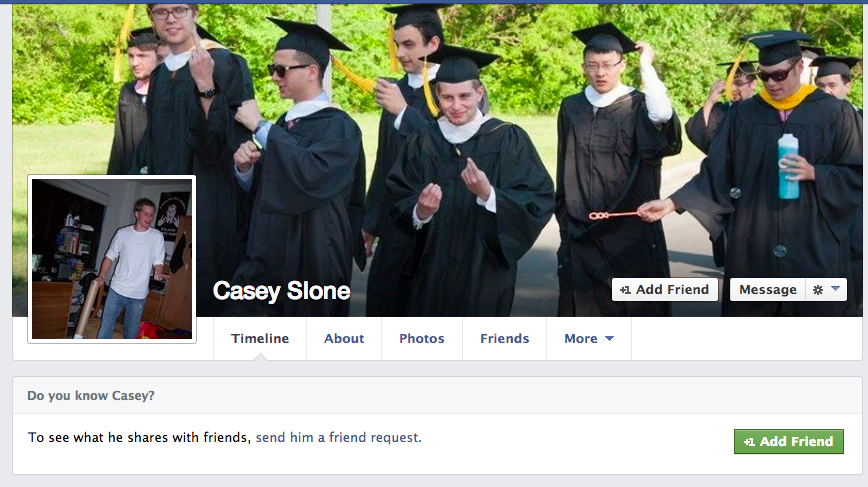 ***UPDATE***
The Facebook pages for both Troy Killmans and Casey Slone were taken down hours after this post was published.

I hope authorities are looking into this. My hunch is that whoever these people were, they were also responsible for the Alexa Taylor Facebook page that was using Maura's photo for her profile pic.

Readers also pointed out a Troy Killman who worked for hotels in the Dover area, around the time of Maura's disappearance.

With the Manchester, NH connection I would not be surprised if this same person is prolifically spamming the Topix pages dedicated to Maura's disappearance.

Whoever it is, they were able to bullshit their way into moderating the family's "official" page and the Murrays and the police should be very interested in figuring out just who it was and why they were taking control of the information coming in and out of that account (including potential leads).
Posted by James Renner at 5:45 AM 24 comments: Links to this post

The Trolls Are Loud, But Few 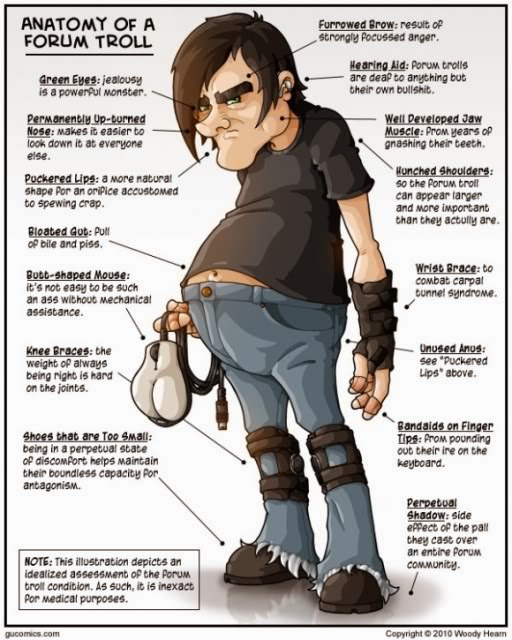 Anyone working in journalism the last few years has noticed the rise of the Anonymous Troll, the frequent online commenter who hides behind anonymity and tosses cheap pot-shots at the writer, or just uses the forum to talk about how they believe Jews are taking over the world or Obama is to blame for everything that is wrong with society.

To them, it's a kind of game. Like Dungeons and Dragons. They can pretend to be someone else, say some things to just get people angry, and then sit back and watch the drama.

The trolling comments on this blog have greatly increased in the last few weeks/months. It really took off around the time I spoke out about the criminal history of Maura's siblings and the man her mother had an affair with and continued as I've reported on recent possible sightings of Maura throughout the U.S.

It's interesting that much of these comments can be backtracked to a small area of Manchester, New Hampshire, which is within the range of the infamous "londonderry ping," that phone call Maura's cell received the afternoon of her disappearance. Though these comments all come from Manchester, they appear under at least a dozen different monikers (some using proxies which attempt to reroute their location to other cities). I keep a list of their I.P.s in case their anger escalates to actual danger at some point. It is also interesting to me that Troy Killman, the silent moderator of the Maura Murray Facebook Page (a young man who is obsessed with the case but has no academic purpose for being so involved) lived and attended school in Manchester, according to one of his multiple personal Facebook pages. Killman banned me from that page when I posted about recent sightings.

I honestly don't know what to make of all this. But it's odd.

At first, I figured I would just ban all unmoderated comments to this blog. But that doesn't help generate new leads. So, going forward, I plan to simply delete these trolling comments. It's a little more work for me, but it seems to make the most sense.

Posted by James Renner at 7:36 AM 7 comments: Links to this post

What We've Learned So Far 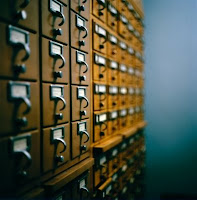 Read about more unsolved crime at The Coldest Cases.

My Search for Amy Mihaljevic's Killer